Raízes is case of study of FDC about social entrepreneurship 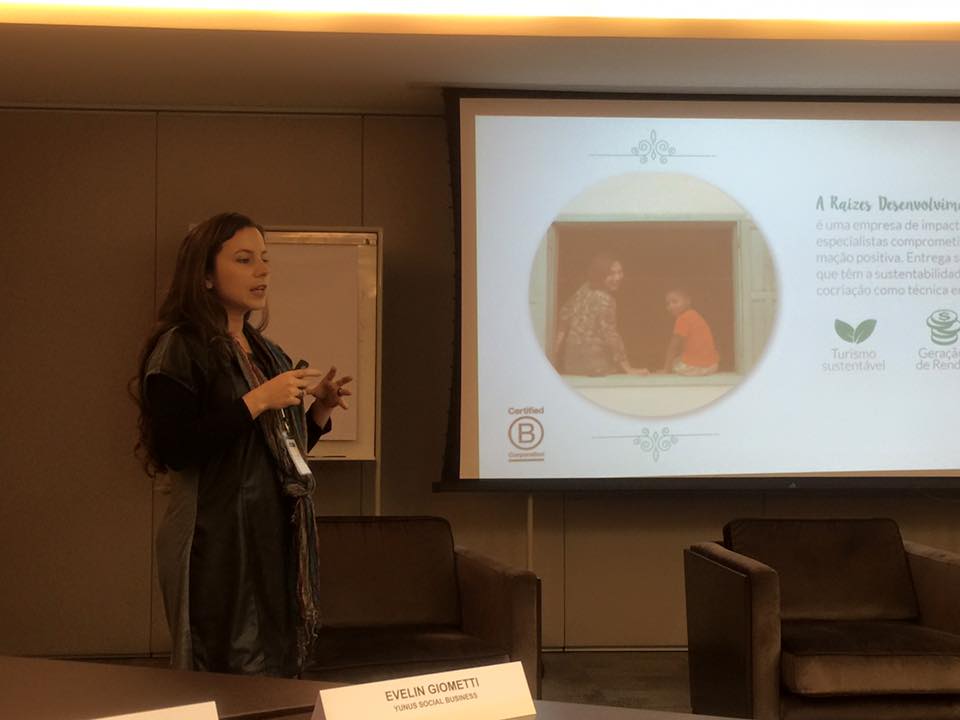 The morning of this Thursday (14th of July) gave Mariana Madureira, director of Raízes, a lot of learning and exchange. She took part on the meeting Power of Synergies – Partnerships between social entrepreneurs and private companies. This event happened in order to promote a research about the same theme, idealised by the professor Heiko Hosomi Spitzeck and performed by FDC’s Sustainability Study Center.

Over four hours, success cases that give incentive to positive debates about the theme were exposed on the Campus São Paulo, from Dom Cabral Foundation, at Vila Olímpia. Raízes’ case, presented by Mariana, addressed the 10 years’ anniversary of the company, mentioning that during this time we developed projects of local empowerment, sustainable development, solidarity tourism and income generation.

Our presence during the event was even better when Thaís Guedes, Projects Coordinator of Toyota Foundation Brazil, talked about Raízes’ role on the Project Arara Azul, which is sponsored by Toyota. “Their participation was very important. The experience from the women of Raízes’ remain making the difference to the project until nowadays”, she said.

The schedule of the meeting also included a welcoming breakfast; the release of a report with a debate concerning the value of cooperation between social entrepreneurs and big companies; presentation of cases of other 2 companies: “De-Lá” and “Assobio”; a workshop about World Café intending to make the participants think about how could we help big companies and social entrepreneurs connect themselves; and, finally, the closing ceremony.

The study emphasizes the potential partnership between social entrepreneurs and private companies. It intends to explain why such partnerships could be beneficial to both business and also the society. This study was concluded based on the analysis of other national and international studies, as well as interviews and example taken from cases of study, including here Raízes’.

One of the highlights of the research talks about the importance of partnerships: “A lot of companies are worried about strengthening bounds with communities where they settle down. However, these companies don’t normally have people with enough expertise to implement successful social and sustainable projects. Unfortunately the result of this is that normally the communities suffer with projects that don’t have any logical schedule. Raízes works as a mediator between the community and the company, acting like a “bridge” that connects what the company wants to offer with what the community really needs”.

Tinder of the 3td sector

One of the motivations of the meeting to celebrate the research “Power of Synergies” is the intention to generate a communication system which evaluates the potential of a partnership between social entrepreneurs and a big company. The idea was presented by the professor Heiko, who teaches at Project Dignity, from MBA in Social Business Management at FDC, which Mariana participated in 2012.

During the workshop World Café we collected information in order to launch the app based on four questions:

This initiative also inspired an article from Folha de S. Paulo and hopefully should be put into practice soon!