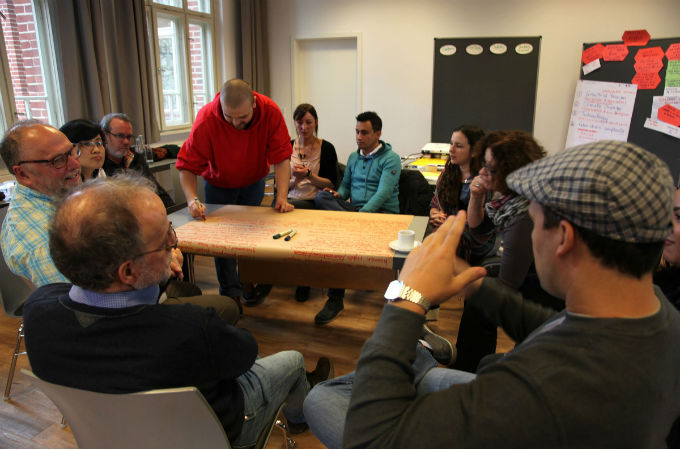 The creation of a collective declaration

2017 is the Sustainable Tourism year. And, yes, tourism can change the world. It is with this question that our founder partner Mariana Madureira went to Berlin, in Germany, as you can find out here. Between the 4th and 6th of March she participated of the Transforming Tourism – Tourism in the Agenda 2030 Exchange and Networking of Civil Society Groups on Tourism. And she came back from it with an answer.

This opportunity was unique ! More than 30 representatives, of 19 different countries, sharing their knowledge and having a collective immersion on sustainable tourism path in the world. And the result was amazing !

We get to co-create a document, the “Berlin Declaration : Transforming Toursim”, with all those specialists on tourism. It was a great exercise of ideas, experiences, priorities, visions of the world and, finally, of convergences. Once again, it shows the power of exchanging knowledge and of the advantage of creating solutions together.

But actually, in all of this the most incredible thing was to feel that, at the end of those three days, we weren’t only a group of professionals aiming to create a document anymore. We were friends, trully commited to positively transform tourism.

The “Berlin Declaration : Transforming Toursim” was a direct result of this meeting in the german capital and it has been presented during the ITB Berlin, the biggest travel trade show. You can acces the document HERE.

The original version can already be red HERE and signed HERE by anyone or any organizations that agree with its content. Access and colaborate. The Bagagem project, NGO in which Mariana is voluntarily one of the manager, was one of the signatory.

We can also highlight the following topics about the meeting :

– the international year of sustainable tourism, named by the UN and the World Tourism Organization (UNWTO), raises this banner and all the discussions involved in this matter.

– the UNWTO lauched a beautiful campaign #TravelEnjoyRespect, but we have to be aware that tourism in itself won’t solve the problems, the dark side of tourism. However, it has to be a constant work.

– from a more judgmental point of view, the civil society reunites to debate how we could actually transform the type of tourism that has been done and what are the effective benefits it brings.

– there are a lot of actors involved in this plot and the responsability of each is proportional to their power to change the game. The declaration is a invitation to act with some clearly defined points about how we hope each player could act from today until 2030 in order to flip this game.

So, are we going to create a new future together ? Are we going to flip the game and transform the world through tourism ? It is possible but it needs dedication and commitment from everyone involded to transform tourism in the first place.